Purpose: To performa data analysis on a sample Titanic dataset.

This dataset contains demographics and passenger information from 891 of the 2224 passengers and crew on board the Titanic. You can view a description of this dataset on the Kaggle website, where the data was obtained (https://www.kaggle.com/c/titanic/data).

“One of the reasons that the shipwreck led to such loss of life was that there were not enough lifeboats for the passengers and crew. Although there was some element of luck involved in surviving the sinking, some groups of people were more likely to survive than others, such as women, children, and the upper- class.” - https://www.kaggle.com/c/titanic

What factors made people more likely to survive?

Assumption: We are going to assume that everyone who survived made it to a life boat and it wasn’t by chance or luck.

With respect to the family relation variables (i.e. sibsp and parch) some relations were ignored. The following are the definitions used for sibsp and parch.

Other family relatives excluded from this study include cousins, nephews/nieces, aunts/uncles, and in-laws. Some children travelled only with a nanny, therefore parch=0 for them. As well, some travelled with very close friends or neighbors in a village, however, the definitions do not support such relations.

Note: Some values for Age are NaN, while ticket and cabin values are alphanumeric and also missing values with NaN. Not a big deal but good to know. Based on current questions, will not require either Ticket or Cabin data.

From the data description and questions to answer, I’ve determined that some dataset columns will not play a part in my analysis and these columns can therefore be removed. This will decluster the dataset and also help with processing performance of the dataset.

Concluded that no duplicate entires exist, based on tests below

Missing Age data will affect Q2 - Did age, regardless of sex, determine your chances of survival? But graphing and summations shouldn’t be a problem since they will be treated as zero(0) value. However, 177 is roughly 20% of our 891 sample dataset which seems like a lot to discount. Also, this needs to be accounted for if reviewing descriptive stats such as mean age.

Should keep note of the proportions across male and female…

Data description states that Age can be fractional - Age is in Years; Fractional if Age less than One (1) If the Age is Estimated, it is in the form xx.5 - Therefore, 0.42 appears to be expected and normal data

Note: An interesting note is that all “new borns” survived. Potential Q6

Were social-economic standing a factor in survival rate? 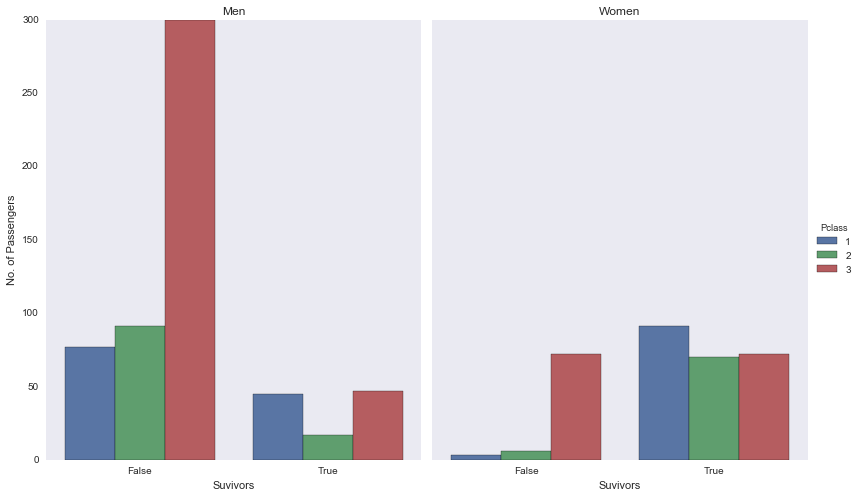 Based on the raw numbers it would appear as though passengers in Class 3 had a similar survival rate as those from Class 1 with 119 and 136 passengers surviving respectively. However, looking at the percentages of the overall passengers per class and the total numbers across each class, it can be assumed that a passenger from Class 1 is about 2.5x times more likely to survive than a passenger in Class 3.

Social-economic standing was a factor in survival rate of passengers.

Did age, regardless of sex and class, determine your chances of survival? 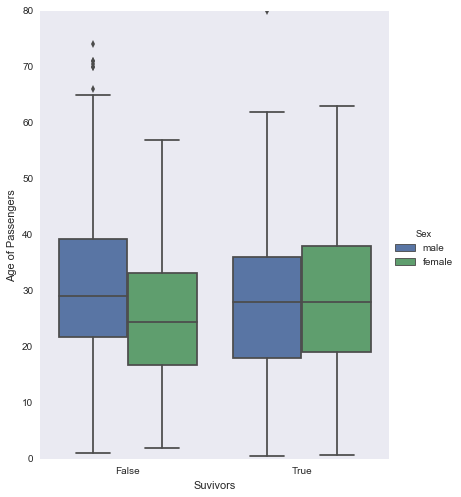 Based on the above boxplot and calculated data, it would appear that:

Did women and children have preference to lifeboats and therefore survival (assuming there was no shortage of lifeboats)?

Assumption: With “child” not classified in the data, I’ll need to assume a cutoff point. Therefore, I’ll be using today’s standard of under 18 as those to be considered as a child vs adult

The data, and more so, the graphs tends to support the idea that “women and children first” possibly played a role in the survival of a number of people. It’s a bit surprising that more children didn’t survive but this could possibly be attributed to the mis-representation of what age is considered as the cut off for adults - i.e. if in the 1900’s someone 15-17 were considered adults, they would not have been “saved” under the “women and children first” idea and would be made to fend for themselves. That would in turn, change the outcome of the above data and possible increase the number of children who survived.

Did women with children have a better survival rate vs women without children (adults 18+)?

After reviewing the data, and giving it a bit more thought, I noticed a issue which I didn’t think of before i.e A woman with Age: 23 and Parch: 2 could be onboard with her children OR onboard with her parents. Based on the ‘Parch’ definition provided in the data description, Parch - number of parents or children on board, I don’t believe it’s possible to accurately determine women with children (parents) vs women with their parents onboard.

The results of the analysis, although tentative, would appear to indicate that class and sex, namely, being a female with upper social-economic standing (first class), would give one the best chance of survival when the tragedy occurred on the Titanic. Age did not seem to be a major factor. While being a man in third class, gave one the lowest chance of survival. Women and children, across all classes, tend to have a higher survival rate than men in genernal but by no means did being a child or woman guarentee survival. Although, overall, children accompanied by parents (or nannies) had the best survival rate at over 50%.