A Visualization of Toronto Community Housing and Neighbourhood Crime

One of the more dificult design choices was determining how to represent the 3 types of related data in one chart. Similiar to a bubble chart, however, the number of neighbourhoods (140) prevented this typical x,y layout. I reviewed many other options online and found a visualization that would suit my data appropriately - Journals Visualization by Asif Rahman

Some of the bubbles are so small, that it is hard to discern, how different each neighborhood is. e.g. Thefts. It would better to increase the size of the bubbles, so the comparison is easy

Change: A hover effect was added for each neighbourhood label that will show the actual number/value of the bubbles. Changing the scale representing the bubbles caused some issues with large outlyers causing all large values to seem to be same size (a reverse of the issue) but also caused the chart itself to require more space or have the bubbles overlap.

Change: A shapefile of the neightbourhood was downloaded, transformed and manipulated into a D3 Topo.JSON file and added as an interactive map representing the neighbourhoods - Topo, Geo JSON and Shapefile

I’d like to see not just the top 10 neighbourhoods with community housing but what about the top murder neightbourhoods or assualts?

Unable to get this feature working properly. Sorting the data and providing group radio buttons for the user to select was completed; however, once data was updated in the chart the previous data re-adjust their positions causing overlaps. More time would be required to implement feature.

The initial chart was similiar to the final version except missing a few details concerning the best way to indicate the crime types/labels, community housing population and actual crime numbers. Also, there was no neighbourhood map. 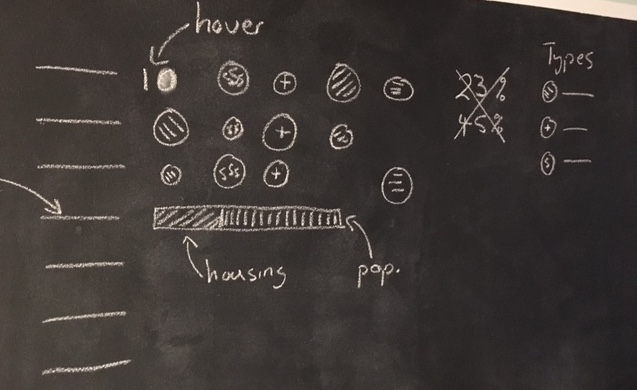 The final visualization incorporates an interactive chart and map. Hovering over the neighbourhood names on the chart will display the actual crime numbers (instead of the circles) and also highlight the neighbourhoods position on the map. 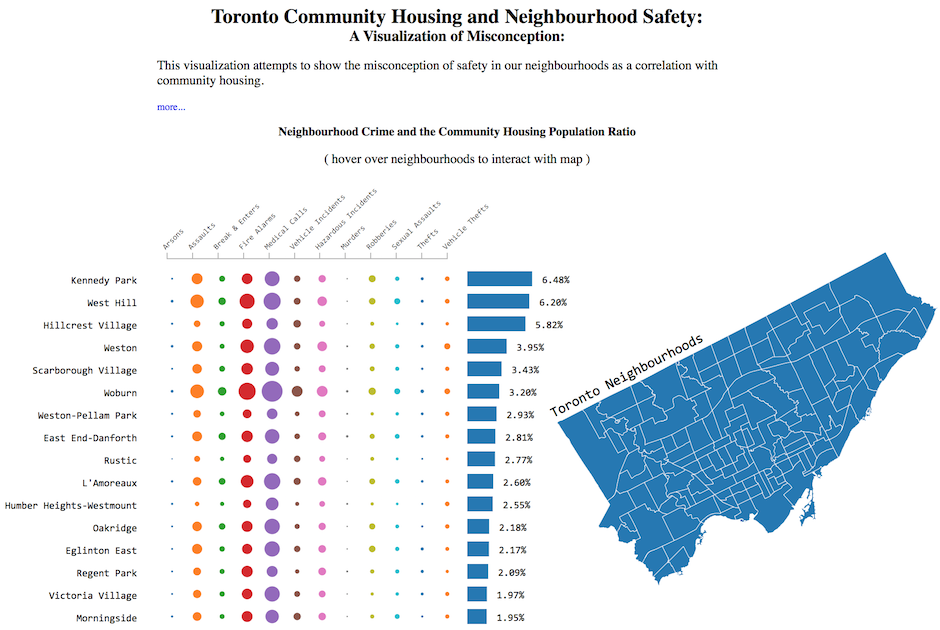